Blog » Engraved Gifts for the Whiskey Lover » How are you Celebrating World Whisky Day this Saturday?

How are you Celebrating World Whisky Day this Saturday?

World Whisky Day is May 16th and I’ve have to admit I’ve been counting down the days.    Ever since I came across the official website a few months back, I’ve enjoyed reading the articles published on Whisky Wednesday, one in particular about a possible Bourbon shortage sent me running to my local liquor store  to pick up a few extra bottles of Knob Creek, just in case.  I also really enjoy the Around the world in 80 drams.  I am so new to the lingo of drinking Whisky that I had to look up what a dram was.   By usage I assumed it was “a little bit” or as I learned later “a wee bit” but now I know it is actually 1/8 of a fluid ounce – or in my opinion a “wee, wee, bit.”  I can’t imagine any one drinking only an eighth of an ounce of Whiskey – but asking someone to join you for a dram sure sounds inviting.

So why this sudden interest in Whiskey?  I have to admit that although I’ve enjoyed a glass now and then over the years I didn’t start really enjoying it until recently and began seeking information.   My interest was also peaked because of business, we engrave crystal and glass and I noticed an increase in orders for more and more whiskey decanters and whiskey glasses over the last 12-18 months.  One of the most popular items has been the engraved vinum whiskey glass sets by Riedel, we’ve etched these for for all sorts of occasions, retirement gifts, wedding gifts  birthdays, the list goes on. 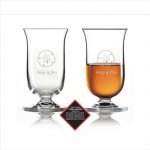 And over the Christmas Holidays we almost sold out of this unique crystal whiskey decanter set with glasses – it’s unusual design is hard to engrave, but really is a stunning set and well worth the effort.  This year it is possible that our orders for whiskey decanters might catch up to our ever popular engraved wine decanters and carafes. 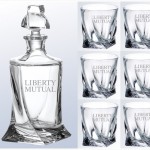 So in following the new whiskey trend, and with World Whiskey Day only a few days away here are my plans.  A small group of us are off to visit the local Craft Whiskey Distillers in our area.  There are only two within driving distance, so we will have plenty of time to learn about each.

The first stop will be Palm Ridge Reserve, a micro distillery in Umatilia, Florida.  According to their website they have an open house May 16th from 11 am to 3pm.   I am really looking forward to seeing how they produce their whiskey and of course the chance to try a dram and buy a bottle or two.

The second and last stop is the St Augustine Distillery, in St Augustine Florida at this time it doesn’t seem that the Bourbon is ready, according to their website, but I am planing on getting on the list for the first pour and learning about their operation.  While we are there we will have to give their other spirits a try.

World Whiskey Day in Florida has all the makings of being a great day, good friends, a “wee” adventure and “getting our whiskey on.”